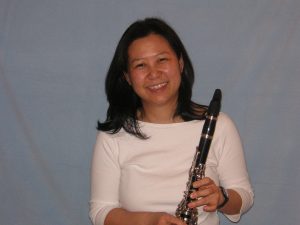 Angela Murakami – is a native of the Washington, DC area. She earned her Bachelor of Music in Clarinet Performance from the University of Maryland where she studied with Dr. Norman Heim and her Master of Music degree from Northwestern University in Evanston IL, where her teachers included Clark Brody and Robert Marcellus.  In addition to being a member of Ensemble à la Carte, Ms. Murakami has played with The Trinity Chamber Orchestra of Washington, The Trinity Chamber Players, the Washington Sinfonietta  and the Washington Savoyards.  Ms. Murakami has also recorded on the Halcyon Productions label with Charles Stier and the Halcyon Ensemble.  Recordings include: “The Clarinet in Age of Enlightenment,” featuring clarinet music from the little known Christoph Graupner through Johann Christian Bach; and “K.439b” featuring Wolfgang Amadeus Mozart’s Five Divertimenti K.439b and the Adagio in F Major K.410.

Ms. Murakami currently lives in Washington, DC with her husband and three cats (one of which enthusiastically participates as the sixth member of the quintet).  In addition, she loves keeping fit with Zumba, yoga and Thai Chi.