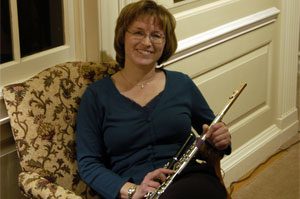 Karen Judkins – is a freelance musician and teacher in the Washington, DC area. She attended Oberlin Conservatory for undergraduate studies and received both masters and doctoral degrees from the State University of New York at Stony Brook. Her teachers included Robert Willoughby, Samuel Baron, Laurie Sokoloff and Keith Underwood. Ms. Judkins has performed in the New York Bach Aria Festival and was a prize winner in several Flute Society of Washington Young Artist Competitions.  In addition to performing with Ensemble à la Carte, Ms. Judkins is a member of the  Prince George’s Philharmonic, and has performed on both piccolo and flute with area orchestras including the Fairfax, McLean, Arlington, Maryland and Loudoun Symphonies as well as the Capital Wind Symphony.  She is also a founding member of Colshire Winds, a flute and saxophone duo.  During the day, Ms. Judkins can be found teaching elementary music and directing choir in the Fairfax County Public School system.