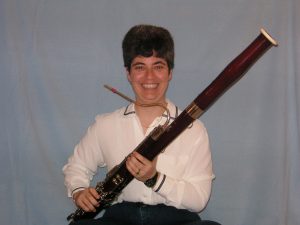 Robin Gelman – in addition to her daily responsibilities as a Senior Financial Analyst, she is a freelance performer and private teacher in the greater Washington DC area. She completed her undergraduate studies in the Double Degree program at Oberlin College and Conservatory (B.Mus. and B.A. in Mathematics), spent one year at the Hochschule Mozarteum in Salzburg Austria studying with Milan Turkovic, and returned to her native New York City to receive her Masters Degree from The Juilliard School where she studied with the late Stephen Maxym. Several years after moving to Maryland, Mrs. Gelman earned her M.BA. degree from Johns Hopkins University.  In addition to playing with Ensemble à la Carte, Mrs. Gelman is currently the principal bassoonist with the NIH Philharmonic and Loudoun County Symphony, and regularly performs with several other orchestras and ensembles in the area.